One hundred years ago, dozens of Jewish families from Jaffa gathered on a hill of a deserted sand dune. Since they did not have slips of paper, they used sea shells to hold a lottery that would determine which plots of land each family would receive in building the new neighborhood of Ahuzat Bayit, which would later become known as Tel Aviv.

On Friday, the descendants of those 66 families paid homage to their ancestors in a festive, emotional ceremony honoring the centennial of the city’s founding.

The Tel Aviv municipality invited the 3,300 descendants and their loved ones to the old Jaffa train station to recreate the memorable photograph that has become part of Zionist lore. The event featured a short play, a speech by Tel Aviv Mayor Ron Huldai, and a panoramic photograph taken by renowned photojournalist Ziv Koren intended to recreate the original portrait of a century ago.

Among the founding families is that of popular singer Ariel Zilber, who recalled his childhood in the big city with fondness.

“All my youth was here, I was born here in Tel Aviv,” said Zilber, whose family owned a plot of land in what is today the city’s trendy avenue, Rothschild Boulevard. “Tel Aviv is THE city.” 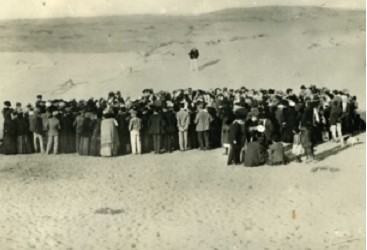 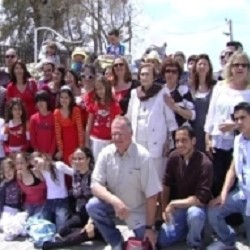